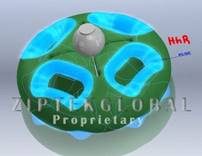 Within 2017, Ziptek received notice of allowance for four patents related to its ZipE® resorbable knotless tissue repair system, including the method for use. The company has over nine U.S. and three international issued patents, with many pending approval.

Ziptek was incorporated in 2012 with three patents, at the time. Angel investor support occurred in March 2014, and was followed by receipt of numerous domestic patents:

International patents have been issued in Columbia, Mexico and Singapore; EU patent is allowed. All issued U.S. patents from 2017 are filed for in 35 other countries.

In 1Q17, Ziptek received FDA 510(k) clearance to market the ZipE® knotless tissue repair and attachment device. The absorbable button functions like a zip-tie, obviating the need to make knots in small spaces, and is designed to disperse pressure across a large surface area and prevent the suture from tearing through tissue and it resorbs.

At the start of 3Q17, the company received regulatory approval in the United Arab Emirates (UAE). Agreements in Israel and the UAE are to be inked within August. Furthermore, Ziptek has signed agreements to be on the prime vendor list for the Department of Defense, NATO and U.S. Special Operations.

ORTHO-R is designed to increase the healing rates of occupational and sports related injuries to tendons, meniscus and ligaments.