Virak Tan, M.D., an orthopaedic hand surgeon, faced challenges in treating fracture dislocations in the finger. To help his patients, he invented his own external fixator for the finger that would be easier to use, create reproducible results and universally treat patients in need of this procedure.

Tan's application, the DigiFix External Fixation System, received 510(k) clearance in January 2014 – the first for his company, Virak Orthopedics. Having overcome the regulatory challenges associated with this milestone, his current challenges relate to distribution and sales.

We spoke with Tan to learn more about his recent endeavors and current focus.

Your company has received 510(k) clearance for the DigiFix® External Fixation System. What were your challenges in obtaining clearance, and how did you overcome them?

Virak: As a surgeon inventor, my biggest challenges were regulatory, because it's not something that I had ever encountered before, or had any experience with. There was a lot of paperwork. FDA requires quite a bit of information and we just had to go through the checklist. I actually hired a consultant who had background in regulatory work to help get us through. Personally, I didn't know that much about the regulations.

What's the background of Virak Orthopedics?

Virak: I had a background in mechanical engineering from school. This went hand in hand with my work in orthopaedics. A part of me was always interested in product development. Early on, maybe 12 years ago, I started product development with Wright Medical as a surgeon consultant and designer, but totally under their umbrella, giving intellectual input and not having much say in the product.

DigiFix began with a discovery that I needed this device for my own patients. There was a lack of technology or product in this space. I started to make prototypes out of K-wires in the operating room, which led to a design.

Because I was familiar with product development at a larger company, I tried to get about ten different big companies to look at it. They did and were interested, but the product just didn't fit into their product portfolios. I still wanted to use this product, so I came up with the design and the 510(k).

What advice do you have for surgeons when approaching companies with their ideas?

Virak: Before anything else, get a knowledge of the intellectual property landscape (by doing preliminary patent search) and market size. Then:

What notable lessons have you learned from your years in the industry?

If you are a company seeking to commercialize, you need a distribution network. As industry is changing, there are a lot less independent sales forces. A lot of the sales forces will work for the company itself. There are a lot fewer 1099 people. That's been a lesson learned. At the end, if you're going to be a profitable company, you have to be able to sell the product. You can have the greatest product out there, but if you don't have the sales force in place, you're not going to get the revenue. Right now, that's what the company is focused on: building that distribution network. As a small company, I think it's going to take a little bit longer to do. Once there is a critical mass, and once everybody hears about it, then people are obviously going to want to use it and want to sell it – it goes hand in hand. If surgeons want to use it, then the sales team will want to sell it. 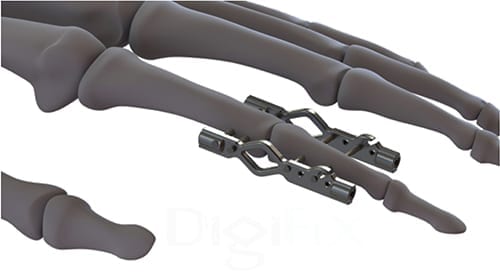 What does the orthopaedic industry look like in five years?

Virak: With the aging population in the U.S., there's no question that people will have more orthopaedic injuries. That's just the nature of the beast. If anything, we're probably going to have a shortage of orthopaedic surgeons in the future.

Patients will ultimately drive the innovations. Here in the West, we have the best technology out there –patients demand it. I don't think that's going to change. I don't know that the growth rate will still be on the upslope, but I certainly don't see it going down.

Also, smaller, more mobile companies are the ones that will make more of a contribution to the orthopaedic device world. The big companies aren't going to go away, but what's happening, in my opinion, is that big companies all have the same products. They're competing in the same market with the same products, and they're just trying to win over a couple of market shares from the competitors. Innovation has to occur when something new, I wouldn't say to the point of revolutionary, but new and really innovative comes along to make something better. You can't just have the same thing – and ten or 20 of the same thing; you have to have something better. Different is not enough. It has to be different and better.

5 Developing Storylines in the Orthopedic Market for 2022

Chart of the Month: COVID Abatement in First Quarter Brings Relief for Most Pressured Segments

Knee replacement, hip replacement and spine have been the most susceptible to disruption from procedure cancelations during the pandemic.

Orthopedic Market to Exceed $54 Billion in 2022